We were staying overnight with my Dad on Saturday and needed to get to Berit's flat in Galashiels on the Sunday.

We started on our usual route out of Kilysth by climbing through Dullatar and skirting round the edges of Cumbernauld - one of a select list of towns that I will always try to avoid cycling through or near (I'm sure the others will feature in this blog sooner or later) - but were soon on to small unknown roads.  The first part of the route headed south-east through a succession of small Lanarkshire villages. Each contained a mix of boarded-up churches, run down council houses and new-money mansions bordering on the vulgar.  One guy seemed to be in the middle of paving his entire front garden with actual cobbles.  Not your suburban keeping-up-with-the-joneses monoblock but actual old-school cobbles.  Maybe it's his tribute to the Queen of the Classics, but more likely it's just to give the two 4x4s parked on top of it a taste of the bumps they are missing on the school run.

By Carnwath we were ready for lunch so opted for the Robertson Arms Hotel - it being the only option.  It didn't look too inviting from the outside, but we were warmly welcomed and shown to a table in the outside non-smoking seating area.  The sun was beating down and we baked while waiting for our lunches.  We both went for cheese, ham and pickle toastie - an off-menu choice that raised a comment but didn't fluster the kitchen - paired with the soup of the day: potato and turnip. The soup was tasty but perhaps not quite as thick as I would have liked. The toasties were excellent - generously filled and tasty. Add a pint of fresh orange and lemonade and  £12.40 for the lot is pretty good value.
After Carnwath our route turned eastward and became more downhill than up. With the light westerly wind the more favourable gradient and lunch in our bellies we started to up the pace.

Before long we were at Peebles. A quick water stop and now it feels like home turf: familiar roads and signs for Galashiels. The back road from Peebles to Innerleithen is familiar from many a training weekend but is no less enjoyable for it. At innerleithen the back road was closed for a mountain bike event, but we could pass in a break in the action and so had the road to Gala pretty much to ourselves.

When we made it to Berit's flat and rehydrated with a couple of quick pints in the Ladhope before showering and heading out to Quinn's for dinner.

You might think that a route cutting through the central belt like this would be all on busy, ugly, roads.  No - they were pretty much all quiet and many of them were beautiful. This was a great day out on the bike - and it got us where we needed to be. 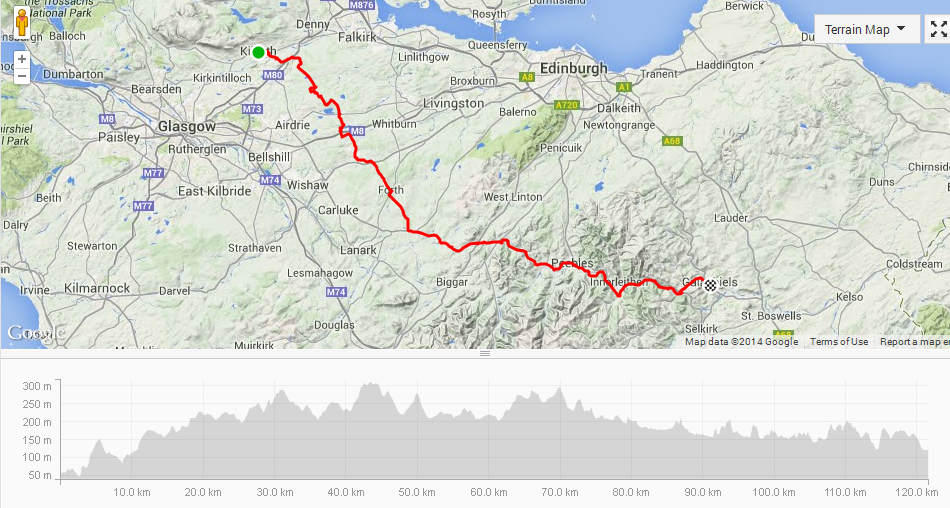