Berit provides the words for this ride:

Mitchell's parents live in Kilsyth, so it was fairly early on that we started to cycle out there from Edinburgh - traditionally from Edinburgh parkrun on a Saturday morning, occasionally making a very early start and doing Falkirk parkrun at the half way point. We've honed the route several times, and now know a very pleasant way with plenty of hills and country roads, and no Cumbernauld or A803. It's more unusual to do the route in the opposite direction, as we usually get the train back on Sunday night after a weekend visit, however on this occasion we were over to see some of the Commie Games with Mitch's dad, and after an overnight stay thought we'd take the opportunity to spend a day in the saddle, and avoid the overfilled trains.

We started a bit later than planned (as usual) after getting distracted by a surprisingly gripping lawn bowls match. As we set off the weather looked a bit ominous, but within 20 minutes I had to insist on a quick stop to remove layers. I also took the opportunity to admit defeat and give Mitch my pannier to carry - he was clearly nearly falling off trying to cycle slowly enough, while I was spluttering behind him with a progressively redder complexion. In my defence, I can usually manage fine behind him if we're both on our tourers, but since Mitch has put a rack on his old road bike and started using it for these trips I'm basically riding a truck while he's speeding along in a Jag!

We set off again through very changeable weather and I was pleased to see a could keep on his wheel again. It's a pretty challenging route out of Kilsyth with plenty of hills, but plenty of stunning scenery to keep you distracted. Still, I was pleased when we approached Cupcake Cafe bar just before Torphichen, where we had agreed earlier to have lunch. We've stopped here a few times for food on our Kilsyth trips and have always received a warm welcome despite our often wet and dirty state. Today was no different, although we'd started to dry off again in the sun after the most recent shower. We both went for baked potatoes, and neither of us were disappointed other than that we were so full afterwards we couldn't try a cupcake! Total £15.25 for 2 baked potatoes  a ginger beer and a coffee.

When we set out again I knew there was some climbing ahead, and as usual I had a post-prandial struggle with jelly legs and a heavy belly. The Torphichen  road was actually closed with roadworks but as usual we pressed on regardless, and as usual it paid off as we cycled through without mishap and had the benefit of a car free road. As we came to the top of the final big climb after Beecraigs country park we came upon another cyclist pushing her bike, at first we thought she didn't have the legs, but it was soon obvious that she had a rear puncture. She'd gone out without a repair kit, so we provided some roadside assistance and were all soon on our way again.

We had a good 15mph back wind, so I knew once we were up that last climb the going would be good. I don't think we dropped below 20mph all the way to the Crammond brig. What I hadn't reckoned on was that my draft was less with the tailwind, and Mitch therefore managed to completely burn me up on this section. He dropped me just as we crossed the A90, and from this point on my legs were burning and weak.

Luckily we decided to follow the bike path network for the rest of the route, so our speed had to be fairly slow anyway. I still got dropped on all the tiny gradients, but we made it home in bright sunshine before 4pm, and then it was tea and cake time :-) 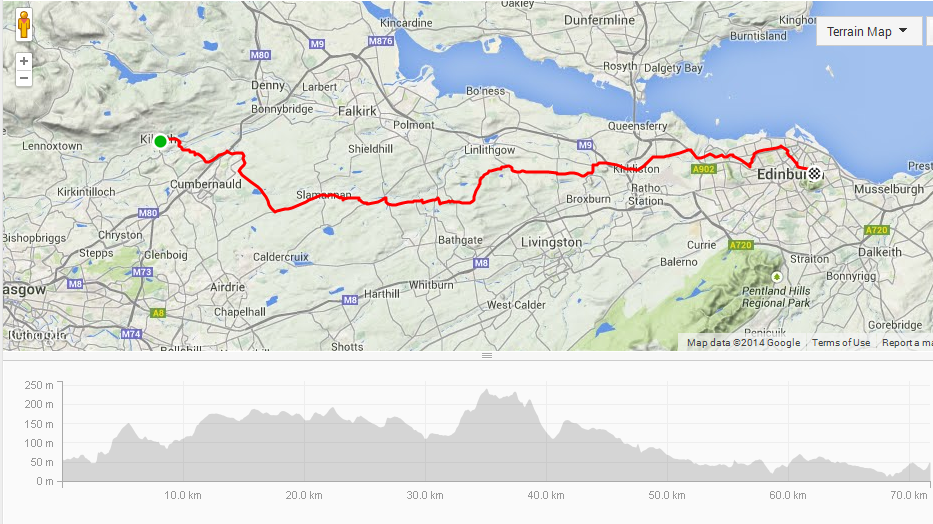