Berit's year in exile is over and yesterday she started back at the Royal.  To celebrate we decided to do the North Berwick Law race, a short midweek hill race from the harbour to the top of the Law and back.  It starts at 7:30 so we knew we'd have to leave work sharp and just meet there rather than trying to ride out together.  I'd spent most of the afternoon hoping Berit would text to say she'd been held up at work and we could call it off.  I'd been out the night before and arrived home after 11 with a 14 inch pizza. Berit wasn't interested so I ate it all.  Then there had been a lunch time talk at work - more pizza.

Five o'clock came without a rescuing text from Berit, so I climbed onto the bike and headed east. I usually leave work a bit later than this and forget how mental the traffic is at five o'clock.  Leith was a carpark most of the way to Seafield Road.  I nearly came a cropper while filtering through it.  There'd been some kind of oil spill in Great Junction street and I could feel my wheels start to lose traction before I found a grippier section of tarmac.  Once out on Seafield road the traffic was free flowing but I felt strangely good and had no trouble keeping up with it as we headed round to Portobello.  The traverse of Porty always presents a Morton's fork: prom or high street?  Porty High Street is daft. Drive or cycle down it, doesn't matter: someone will pull out on you. In good weather the prom is mobbed so you are reduced to walking pace.  While the weather was fine, it had been very wet earlier so I figured the crowds wouldn't have had time to form so opted for the prom.
Through Musselburgh via the shared bridge  I was soon on the relatively quiet coast road and making good time. By rights I should have been taking it easy, but there were other riders about - including one who'd come past me too fast on the prom so I had to show him that I was riding slowly there for a reason :-)
Navigation to North Berwick couldn't be easier - keep the sea on the left and point at the Law - and the coast road was nice and quiet.  I'd soon forgotten how shabby I'd felt earlier and was glad that Berit hadn't texted to call the whole thing off.

Through Aberlady and I discovered that I still can't take that right hand bend back onto the coast road properly - I must go back and repeat it till I get it right one day.  After Gullane I overtook another  cyclist going for the drop bar and panniers look. With a cheery hello I passed him and he promptly sucked my wheel all the way to North Berwick.  I upped the pace a bit to try to drop him, but he wasn't to be shaken.  He even tried a cheeky attack for the 30 sign, but I wasn't going to allow that and took it by half a bike length. He was just going along to watch the race rather than take part.
The final run to the Harbour was uneventful and I was well in time to get us both registered and chat to a few folk before Berit turned up from her ride with a smile on her face and cramp in her leg.

Now it was just the small matter of the race, followed by a steak roll, then fish and chips, a cheeky pint and the train home where good chat was provided by couple of our EAC clubmates who had been marshalling the race.  All in all a splendid way to spend the evening after a day's work 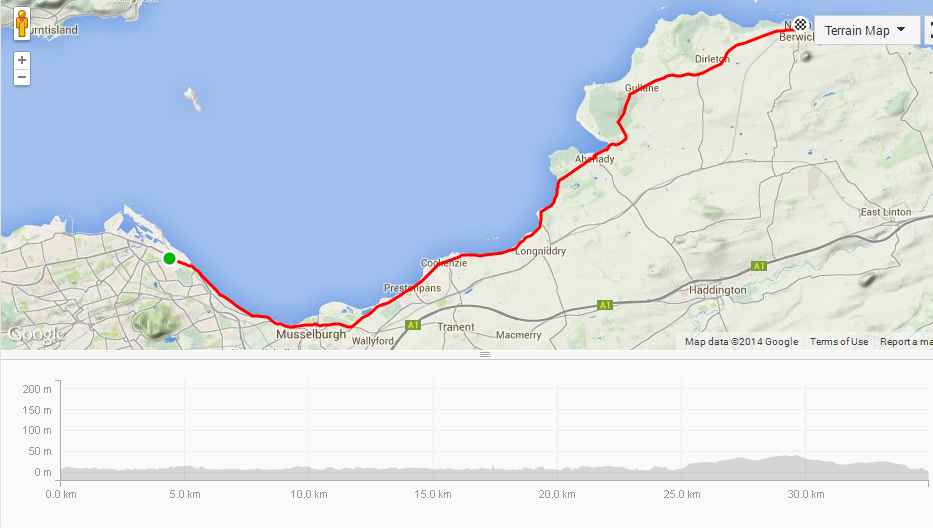