We had another midweek hill race last night - just up the road at the Hillend ski centre this time. For a race as short as this one there is no question of how we'd get there.  It simply isn't worth driving any distance to run for only 25 minutes. This would never be such a fun ride as last week's out to North Berwick: through the city at rush hour on the day the schools went back.

All routes to Hillend will end up going through Morningside and up Comiston road, but there a few options in getting there from Leith.  Google recommends some bike path and Princes Street madness, but I opted for Holyrood park and Grange Road.  The most direct way would be Leith Walk and the bridges, but from Leith Street all the way to Chambers street is always unpleasantly busy and is pretty much at a standstill at rush hour.

Nothing terribly much to report on the ride itself. Pretty much all uphill and busy traffic, but riding through it sure beats sitting in it.

At the race I registered and wondered where Berit was.  She'd set off before me and had a shorter ride.  A quick text solved the mystery - she'd ridden all the way to the top car park. Registration was at the bottom of the hill.  It was great to see that we were far from the only ones who had ridden there and that a good few folk ran there too.


On the way back Berit nearly dropped me going through Morningside - she'd got a nice draft from a delivery van and was taking full advantage on the uphill.  I'd been sensibly taking it easy through the junction and found myself gapped.  Despite us keeping up with the van all the way up the hill, I could feel the cars behind becoming increasingly desperate to overtake, which they did at the first half-chance.  Of course we saw them again at the lights.

We popped in to Hemma for our dinner on the way home. I'm not sure if the short ride and shorter race justified the bacon and cheese burger, but it was rather nice and the service in Hemma is always great. It's a vast improvement on The Tun that used to be there but was rarely open and always quiet and a pretty good rival in burger quality terms to the Holyrood 9A up the road. 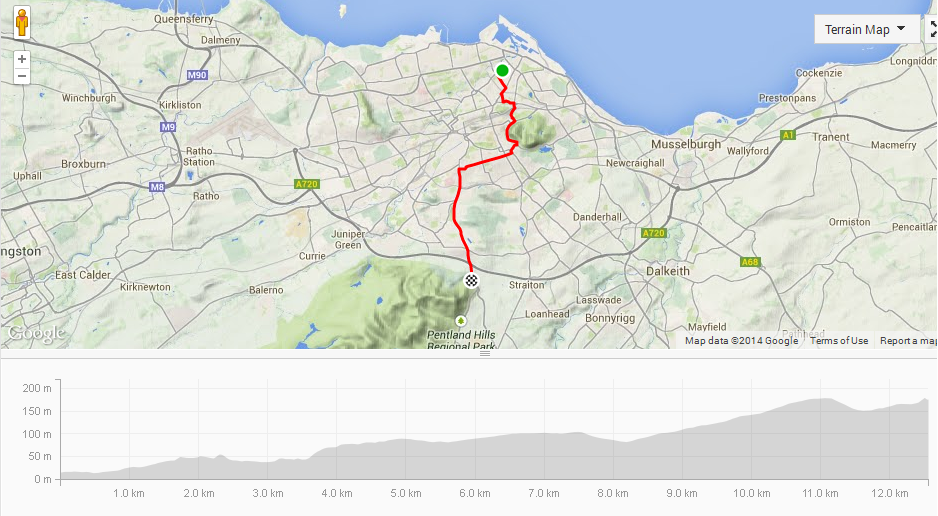