Leith to Gala (via the Bike Shop)

Berit still has her flat in Galashiels so we decided on a weekend of running down in the borders - the Cademuir Rollercoaster race on Saturday and a long cross-country point to point on Sunday. I've done the Gala trip many times over the past year and have refined the route to find the best balance of quiet roads and speed.

Two things were different about this trip from normal - I had to visit the bike shop on the way and Berit would be joining me on the way down. The reason for my bike shop visit was not a happy one. A couple of months ago I crashed my trusty single speed commuter into a wall on Fishwives' Causeway. This left the front fork rather splayed and I was worried about what it had done to the frame.  The prognosis was not good - it bore the tell-tale signs of irreparable damage. This frame was older than me - it has always been such a joy to ride in the various configurations I've had it. This isn't the first time I've crashed it - that was in 2007 in Glasgow when the handlebar snapped as I raced through Charing Cross. I had a moment to wonder wtf had just happened before the half of the bar dangling from the brake cable found its way into the front wheel and I hit Sauchiehall Street hard. A  fractured elbow, a comedy pinky dislocation and the frame being reborn as a single speeder were the results. This time my injuries were less severe than the bike's and I popped in to Eastside bikes on Friday evening to take a look at a possible replacement frame. It was exactly the same size and also made of steel. Probably not the Reynold 531 credited with make the old frame such a comfortable ride, but I guess we'll see how it goes.  I think now the stem, the right crank, and the chain ring are the only parts left from the bike I bought from the Bike Station for £50 in late 2006.  Is it still the same bike?

From the bike shop I headed east to Musselburgh and then up Carberry hill towards Pathhead. It seems like the wrong way, but I've found that this is the quickest way to get on to nice roads and avoids the Sherrifhall roundabout. I only started going this way when they closed the A6106 Millerhill Road, but I reckon I will stick with it when that re-opens unless a better route is opened following the completion of the railway works. I thought I'd be behind schedule for meeting Berit, so I put the hammer down.


By the time I got to the meeting point Berit had been there for a wee while. We continued together on to Pathhead, where I always convince myself the climbing is mostly done. In reality there's plenty more until we hit the A7 at Falahill. From here we are on the A7 for a short section - made slightly longer by the railway works - and then it is the old coach road until we are just a few miles outside Gala.


Over the last year we've really seen the railway take shape along this route. On one of the windiest days of last winter we accepted a lift from a manager on the project. He told us how they were cleaning the lead paint off the old bridges: blast them with high speed jets of tiny ball-bearings. Both the bearings and lead paint are highly toxic so this was done under a sealed low pressure tent. The workers had to wear special suits and go through a decompression routine before and after each shift or risk the bends. He was a lovely chap whose chief concern seemed to be that no-one should die building a railway. It comforts me to know that he is running the show and I must report that most of  the works lorries I encounter have always given me plenty of room when overtaking - and none have been so bad that I've been worried. The tents have all gone now and the bridges have been repainted in one assumes a more environmentally sound manner. Sleepers are stacked up waiting to be laid and piles of ballast are visible along the route - it's looking good for the trains to be running in autumn 2015.

After the old coach road, the last few miles into Gala along the A7 are pretty fast, before we know it we're at the thirty sign and rolling down the hill to the flat in time to have a quick shower and grab dinner in The Golden Lion. The food here is suprisingly good. The menu looks like stanard wetherspoon's fayre, burgers, fish n chips, generic curry etc, but the curry can be spiced to your liking and the chips look and taste like they've been cut from actual potatoes on the premises.

On Saturday we rode to Peebles and back for the hill race and on Monday morning we rode back to Edinburgh. I forgot to take the charging cable for the camera, so no pics of these rides I'm afraid. 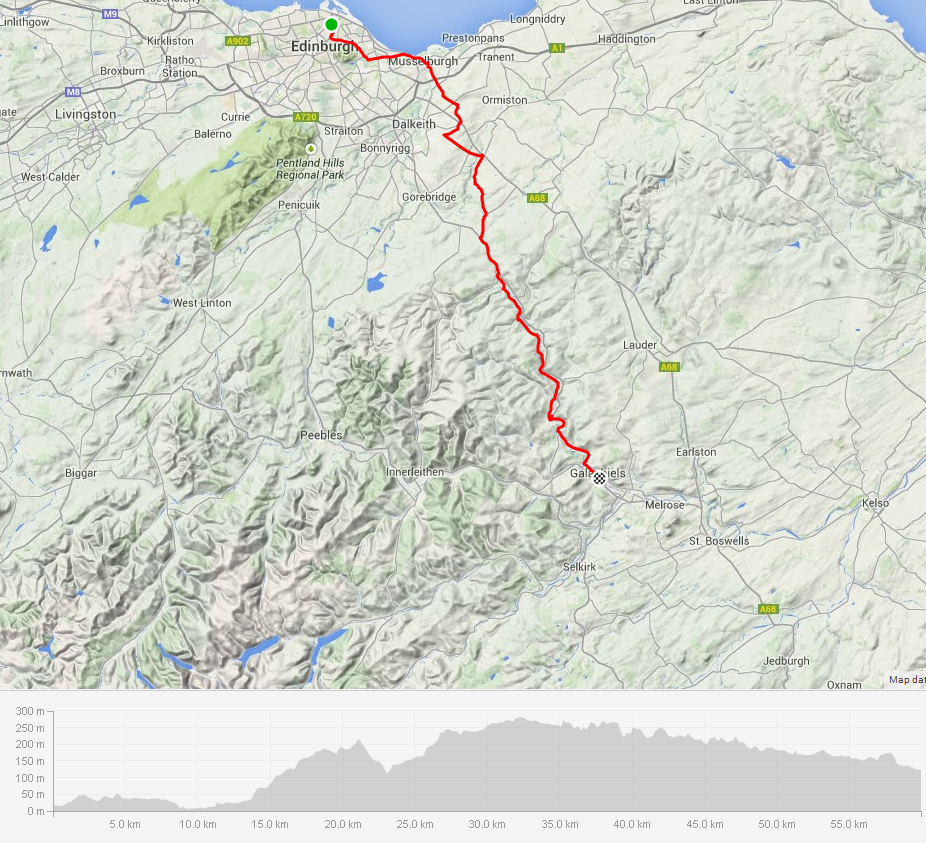 Google says:
(including stop at bike shop)
Driving: 1 hr 8 mins [unlikely at 5pm on a Friday to be fair]
Public Transport: 2hrs 10 mins