Forgive me... it's been a while since my last blog post.  Starting this blog oddly coincided with the lowest cycling mileage I'd done  for a while and a slight switch of training focus from triathlon to running, to no real focus and then on to a broken collarbone.  Not that we hadn't been riding places - indeed we'd ridden up north when I fell at a hill race and had to abandon a bike with friends and get the train home.  There's nothing like a few months totally off the bike to remind you how much you love it.  It also reminded us how much fun hillwalking is, given that walking was he only exercise I was capable of for a while.  We knocked off a few Munroes and had a surprising encounter in the hills on the way north to collect my bike.

We'd signed up to the Fox Lake 16 km trail race a while ago and written in the transport column of our race planning google sheet "bike?" and given it little more thought. When Rosemary messaged asking if she could get a lift, I just replied that we were planning to cycle.  At this point I didn't realise how horribly early the race was, and hadn't really thought about it being in mid-December. Registration closed at 9 and the race started at 9:15.  This meant we'd have to leave in the dark and couldn't very well show up in the van having refused a lift to Rosemary.

We decided that we need to leave at 7:30 and owing to Berit dealing with my excesses at my work Christmas do the week it was my turn to make breakfast ( a situation which it may take a while to reverse given the results of said excesses) I set my alarm for 6:30 and managed to get up after only one snooze period (that's nine minutes, as any iphone owner will know).  With breakfast done I was brushing my teeth when Berit announced that she was leaving and I should catch up, because she didn't want to be struggling to keep up with me.   This is Berit who has been cycling 16 miles to work most days (and sometimes the same home too) for the last few months while I have been mostly walking and have only recently got back on the bike.  Berit who beat me on the bike at St Mary' Loch Triathlon before I broke myself.  I finished my ablutions as quickly as I could, finished packing and left the flat. Then went back to get some gels that I knew I would need before setting off in pursuit through the dark (at bang on the agreed time of 7:30am).


I followed the familiar route to Musselburgh, using the big ring and reaching for the drops more than usual outside of a race.  Indeed I hadn't ridden this hard for a long time.  It felt good, but also didn't feel particularly sustainable.  Then I realized Berit's game.  At St. Mary's Loch she'd gotten the taste for beating me.  She'd only ever beaten me in one running race before (the Tom Scott 10 miler, when I was injured) and she obviously fancied her chances again, so thought she'd make me ruin myself chasing her down.  Well there was nothing else I could do, I'd been out-manoeuvred and had to just go hard through the Honest Toun, past the racecourse and up towards Wallyford, fiddling with the dodgy wire on the BFL(*) evertime it cut out. Ah, but what's that on the hill ahead.  Wishful thinking is what.  Another cyclist ahead, but the lights were wrong and he turned off the wrong way.  Through Tranent and I knew that if I didn't see her on the long, straight A199 my goose was cooked - I was unlikely to catch her before the end.  I didn't see here, but kept the head down and pushing on the pedals through Macmerry and Gladsmuir.  This is one of my favourite roads for riding fast on.  Wide, straight and quiet it rewards every effort and the miles just fly by.  Eventually I saw the distinctive flashing of Berit's lights  - leaving a lay-by outside Haddington.  Taking a bloody rest to save her legs for the race!

I caught her at dawn, and as we exchanged notes on the ride so far we realized we'd miscalculated the timing and need to continue a brisk pace to have hope of making registration before it closed. This we did, adopting a 2up TT formation and arrived at Fox lake just as the sun rose above the Lammermuirs
and with minutes to spare. 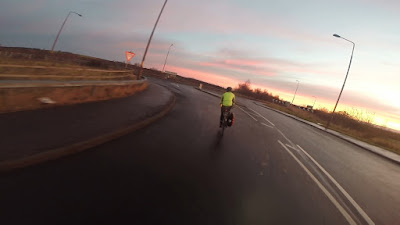 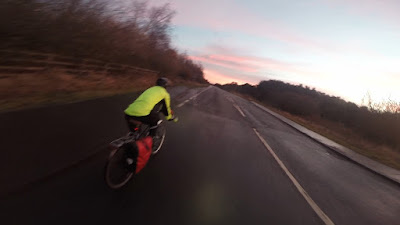 After the race we learned that Izzy had left the house at 7 - while we were still sitting in bed drinking coffee and munching toast.

Driving: 33 minutes
Public Transport: 1:13 (to get there an hour early)