Active Transport: It's not all about the bike 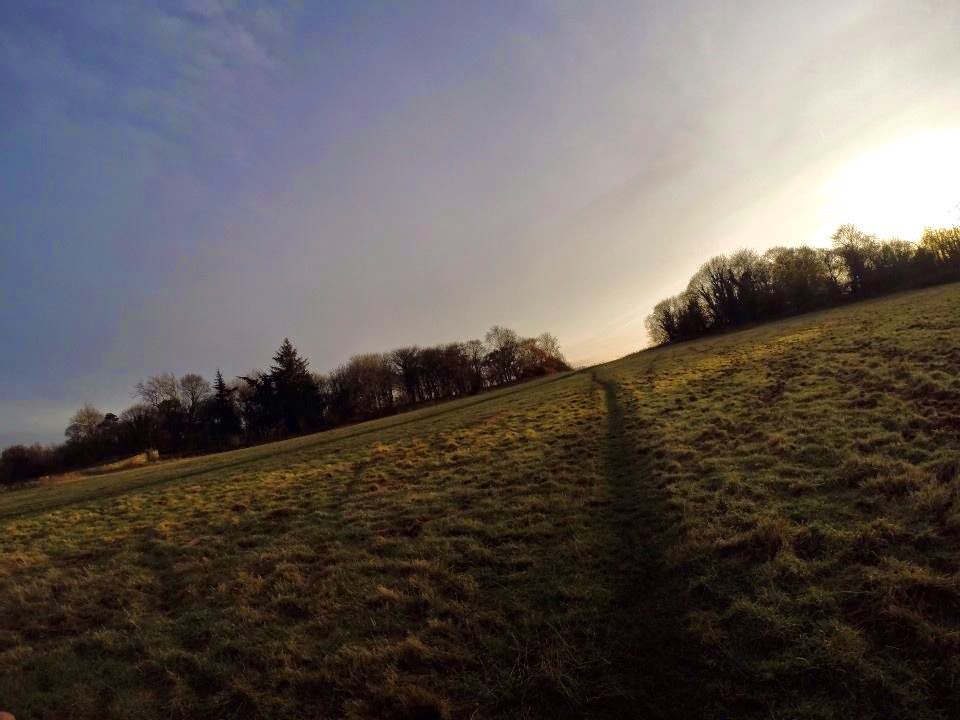 I've been a bit quiet on here lately, not because I haven't been riding my bike, but because I've been too lazy to write about it.  I've been getting about as normal - with trips to Kilsyth and Galashiels (via parkrun) supplementing the usual getting about town.  My bike mileage has been a bit lower though, because I have been ramping up the running, in training for the Paris Marathon in the spring.

A few weeks before Christmas, Berit and I had a plan to get up early, cycle down to Gala and then do a long run. But then an unplanned late night put paid to us getting up early. Feeling somewhat delicate we talked over ways to justify ditching the planned 5+ hours of exercise when Berit came up with the perfect excuse. A couple of weeks earlier I suggested that we run to Gala in the summer. It'll be about 40 miles and will require some  planning and reconnoitering to find the best route.  And maybe a bit of training to be fit for it. We could start both by running the first leg and getting the bus the rest of the way. This would get us to Gala for the cross country and get the required long run done.


The bypass is always the most annoying obstacle when seeking to run south out of Edinburgh. There is a fairly new bike path between Straiton and Lasswade, so we figured we'd make for that. We started by heading over the shoulder of Arthur's seat and through Duddingston to get to  Craigmillar Castle park. Here we met a large group of ERC juniors on their mountain bikes - all well drilled by the coaches to clear the path for us. The route from there though the Ellen Glen's wood and the Burdiehouse Burn Valley park is one of Ednburgh's many hidden gems. I used to work up at Loanhead. This route to work is about the only thing I miss about that old job. We didn't go all the way to Straiton, instead turning up Lasswade road to get on the bike path. One of Edinburgh's many dismantled railways, it has recently been cleared and tarmacked by sustrans.


In Loanhead we found the public toilets open and functional. A crazy steep narrow winding road led us down to to Bilston wood where a sign showed us we should have stayed on the railway path for longer and avoided much of the road. Over a river and then it was up The Cast. Marked as a road on Google maps it was little more than a muddy track. The going was getting tough and we were beginning to question the wisdom of road shoes. Across a main road and then another track and some country roads took us into Carrington.

It was pretty much dark now, so it was head torches on for the final section to Gorebridge. This was mostly along country roads until we came upon the Gore Way and we headed into the darkness alongside the Gore river.  After some messing about to find the path again after it took us along the A7 to cross the river we came upon a bus stop outside Gorebridge. We didn't have long to wait for a bus to Gala, where the exertion and the cold finally caught up with us and it was an emergency shower and a strictly medicinal hot orange liqueur for Berit. 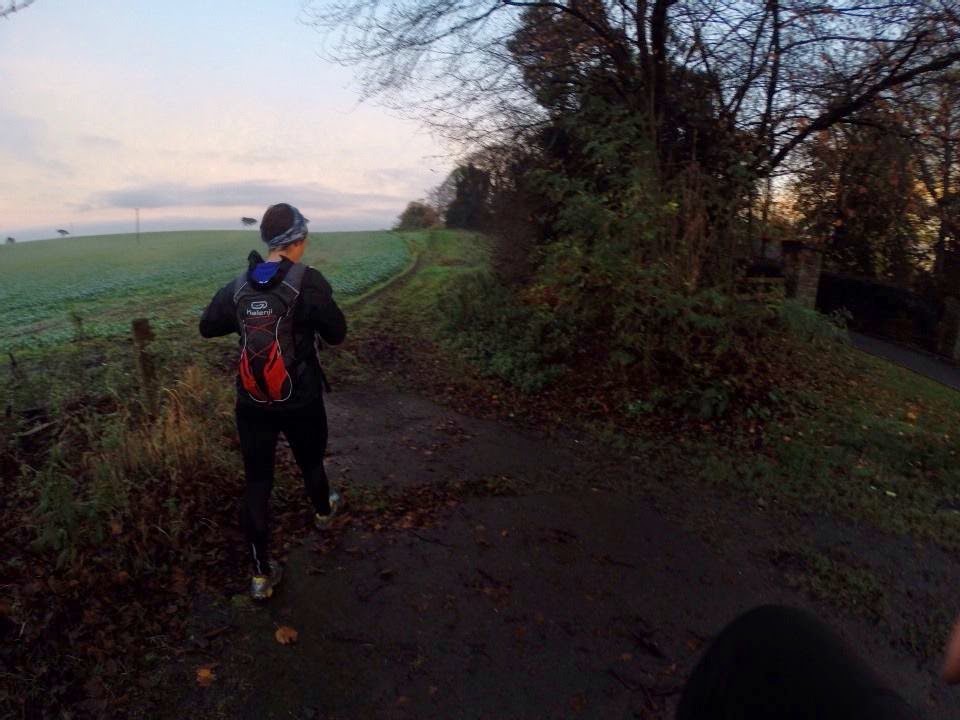 It was a great afternoon of running and has been enough to convince us that the whole trip is doable.
Since then we've re-visited the Loanhead to Middleton section to confirm we can avoid the steep road to Bilston wood and sadly discover that the paths to avoid the  country roads to Carrington have been largely destroyed by farming, so it'll be back to the tarmac on the big day for us.


So what is this doing on a blog about riding my bike?  Well, I guess it's really a blog about active travel.  Usually that means riding my bike, but it does involve running.  Strictly speaking walking is active travel too, but it takes ages.  Running from Edinburgh to Galashiels might seem extreme, but over the last few years I have run for transport for many shorter distances - to work, home from the pub (an interesting  GPS trace that) and on Christmas eve round the town to get the last of the shopping done. 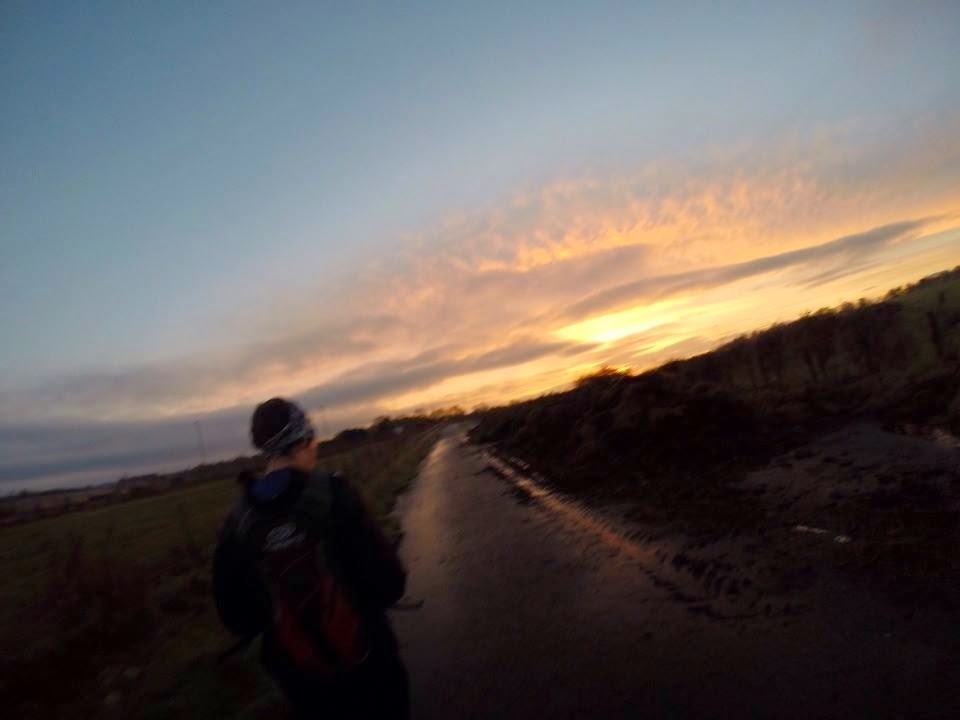 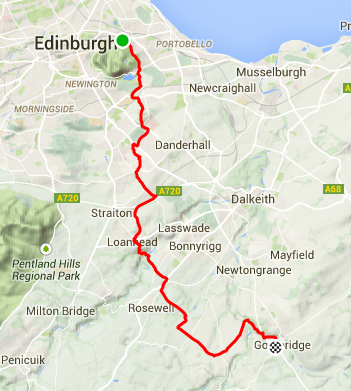