Forfar into the wind 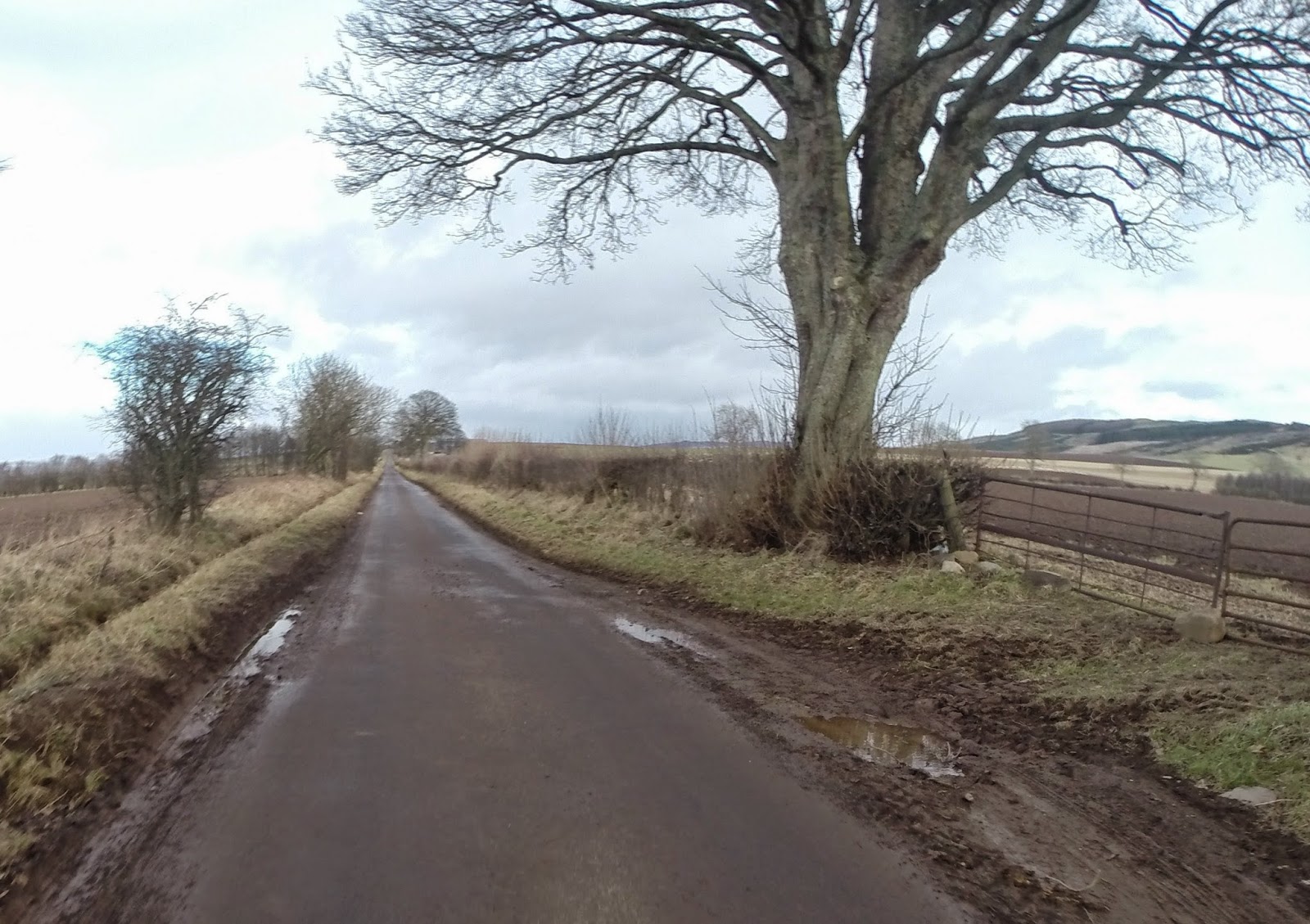 I've sung the praises of the Crack'd T-Pot in Perth on here before.  It's our traditional first cake stop on the ride up to Aberdeen and we're always warmly welcomed by the owner.  We've been trying to talk her into to doing the East Fife Triathlon - just a few more years and we'll have her convinced I'm sure.  We failed to make the trip last year, but the Forfar Multi-terrain Half Marathon provided the perfect excuse to pay an early visit this year.

The weather forecasts for the past few weeks have been increasingly doom-laden with dire predictions of snowmageddon that has never materialized.  As Saturday approached it looked like the wind would be our enemy with the prevailing south-westerly being replaced by a bracing northerly.  With Berit nursing a cold and the wind set against us, it would have been easy to wimp out and head for the station - or worse, the van - but we sharpened our resolve and got going more or less on schedule at 8am.


Since we had a long way to go and it might have been icy we decided not to mess about with the bike paths had headed along the A90 for the bridge. While we were riding two men were attempting two very different world records.  In Melbournce Jack Bobridge set off about the same time as us. Steve Abraham had already been heading south (I guess he'd seen the forecast too) from Milton Keynes for two hours.  By the time we reached the bridge Bobridge had climbed off his bike having ridden 51.3km - an agonizing 500 meters short of the Hour Record.  Abraham was still riding long after we'd finished and has 11 months to go in his attempt to break the record of miles ridden in one year.  In 1939 Tommy Godwin rode  75,065 miles.  That's over 200 miles a day.  Today was a rest day for Abraham: he only rode 150 miles.


After the bridge it's through Inverkeithing and up a steady climb to Crossgates. This road always feels like the proper start of any trip north and I usually drop Berit and wait for her at the top. Today the wind kept me pegged back and she was able to tuck in and keep on me all the way up. It was the same story all the way through Fife and into Perth and Kinross. North of Milnathort I decided to drop back for a rest from pushing the wind, but it wasn't enough.  I could feel the bonk coming on. The thought of the Crack'd T-Pot sustained me and for a while I thought I could last till then but common sense prevailed and I called a halt at Glenfarg. We dug out our sandwiches and half a filled rolled was enough to perk me up again and I was soon pushing the wind again heading for our well earned panini in Perth.

We rolled into Perth bang on midday and eagerly parked outside the cafe.  Disaster.  It was closed - for ever!  The chairs were on the tables and there was a nice note in the window thanking everyone for their custom. There wasn't even a ToLet sign up yet - it seems we had only just missed it.  It wasn't quite an Old Penang moment, but it was pretty close.  The rides to Aberdeen just won't be the same.  I hope they decided to close and weren't forced out of business by lack of custom.

There was a much posher looking restaurant, Duo, across the road, so we went there instead.  It didn't look ideal, but we didn't have time to mess about looking for somewhere else.  We ordered soup, coffee and cake to all come at the same time much to the bemusement of the very French waiter. It did all come at once and was all delicious.


Out of Perth and this time I did drop Berit on the climb through Scone.  I always do.  The first time we did this  I didn't notice for ages until I went to say something to her and she wasn't there.  She wasn't too happy when she eventually caught up.  Lunch always seems to speed me up and slow Berit down.  Combine that with a long steady climb and you've got a recipe for one of the few arguments we've had when riding together.  Not this time though, practically trackstanding at times I managed to keep her in my mirror until she'd digested her lunch and the road had levelled off.  From here it was a succession of straight, flat back roads all the way to Forfar.  We did the race the next day and then rode to Arbroath to get the train home on the Monday. 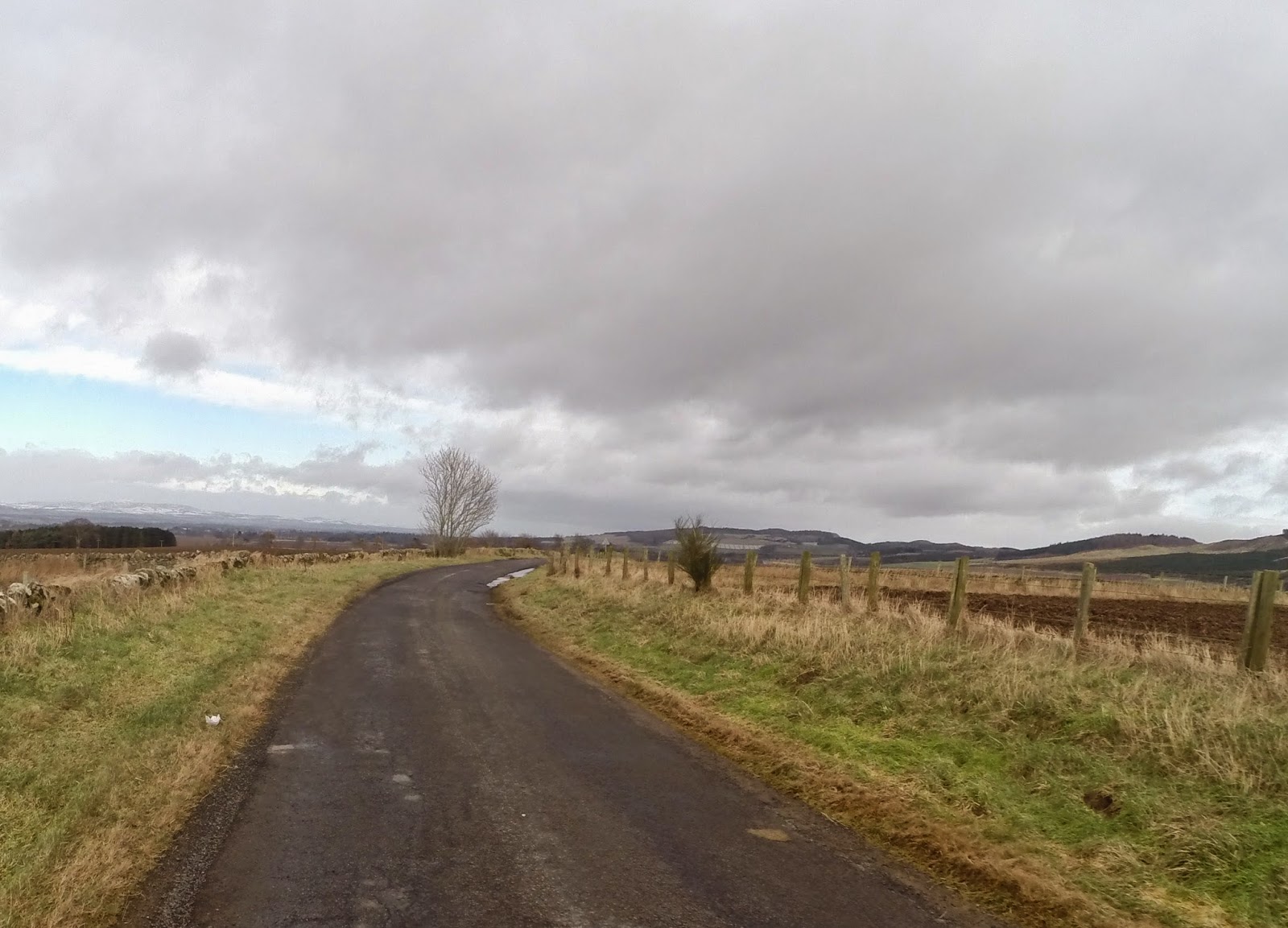 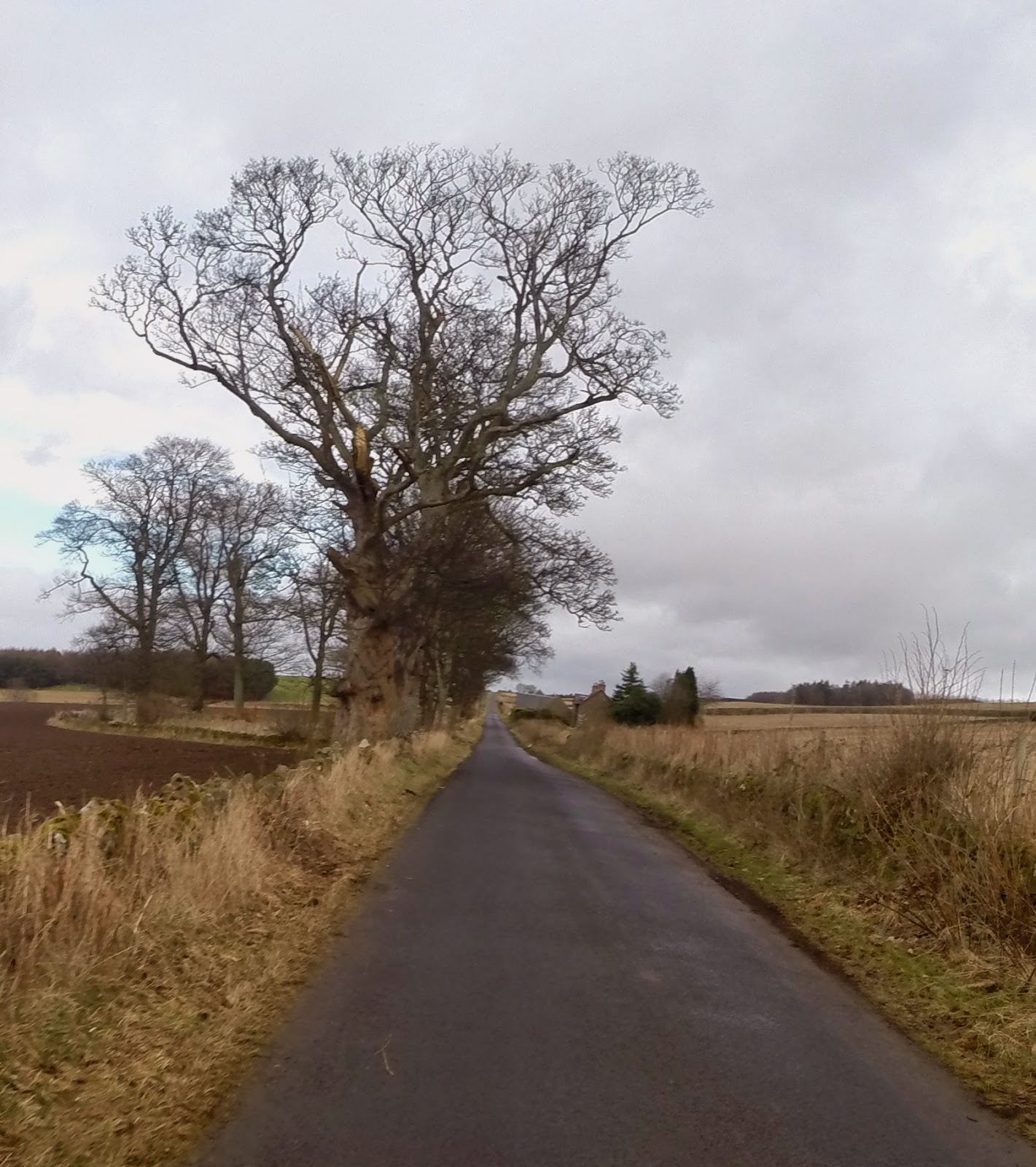 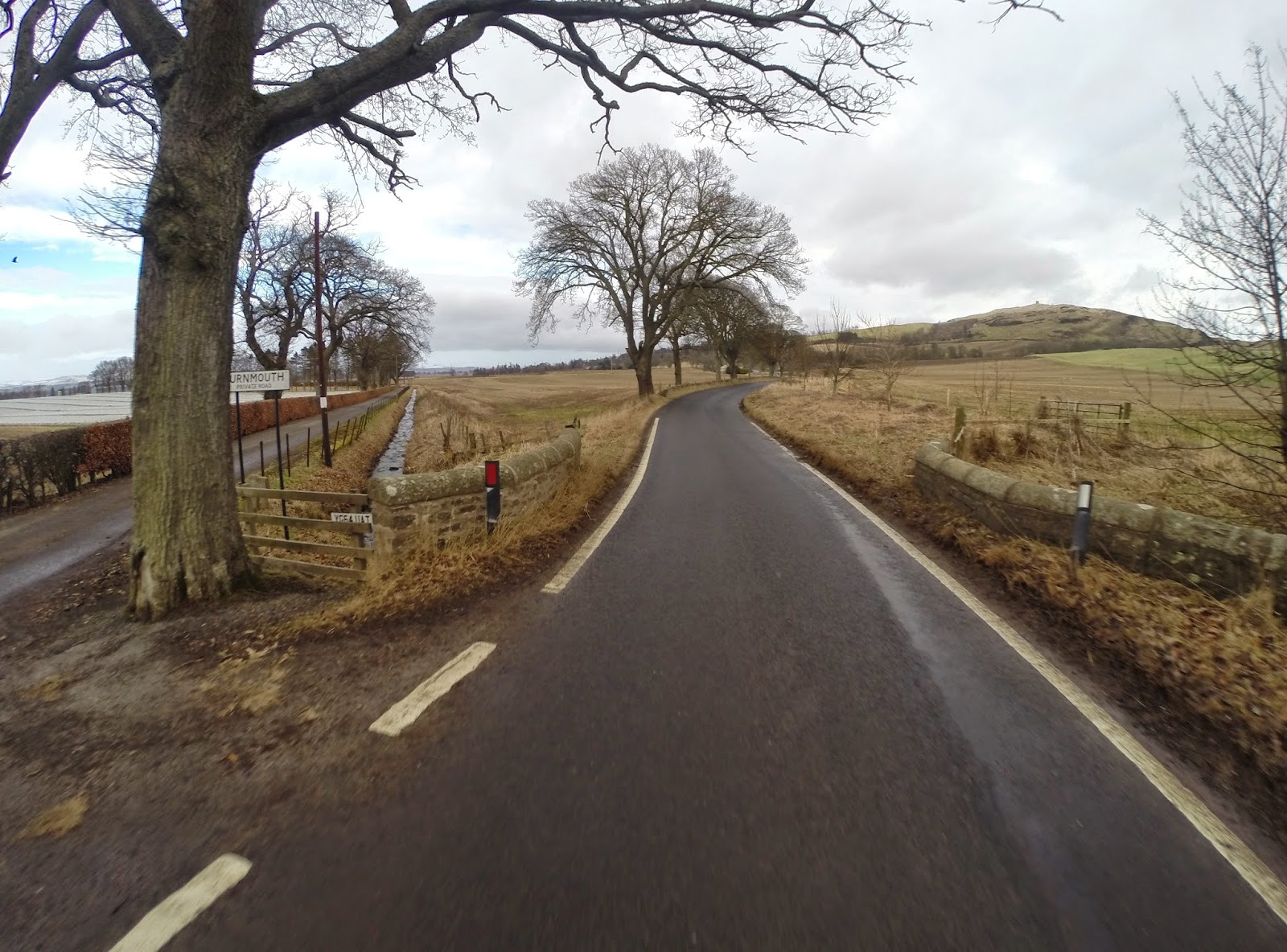 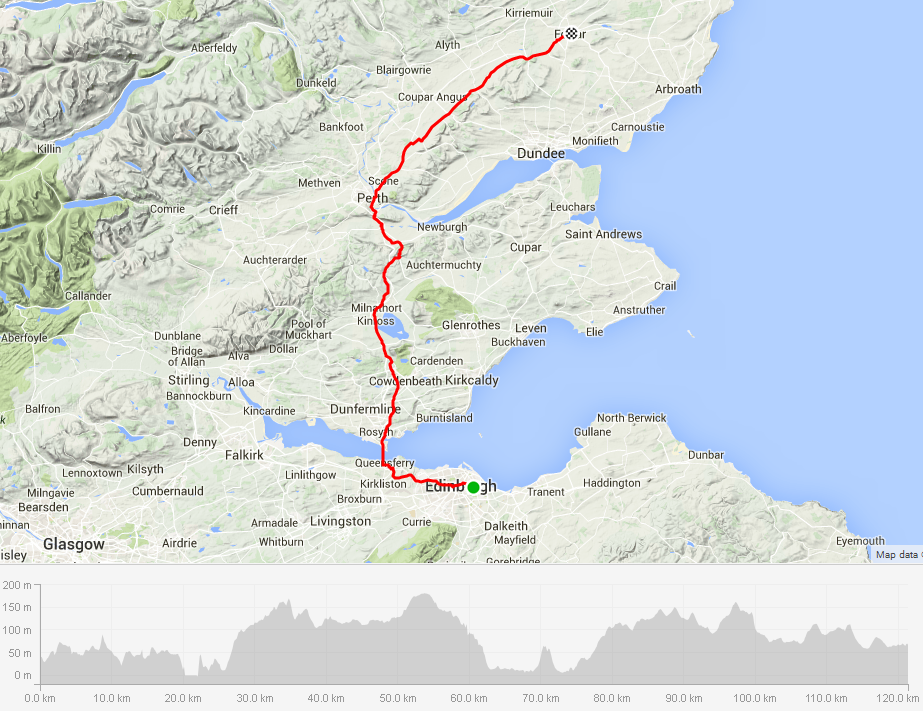